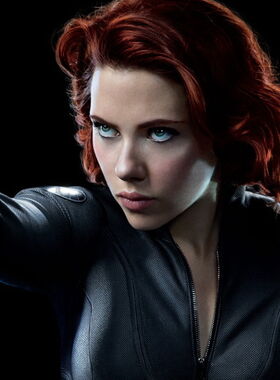 Height: 5″7
Weight: 131 lbs (60 kg)
Eye Color: Blue
Hair Color: Natasha’s natural hair colour is auburn, but during her early days as a Soviet agent she often dyed it black. She has dyed it various colours while under cover or in disguise of another person.

Artificially Enhanced Physiology: Natasha has received the Red Room’s variant of the Super-Soldier Serum. As a result, many of her body’s physical capabilities have been heightened to the peak of human ability.

Peak Human Strength: Her physical strength is at the peak level of natural physical limits of a woman of her height, weight and build. She is capable of lifting up to 500 lbs.

Peak Human Speed: Her speed is also enhanced to the peak of human capability. Natasha is as fast as a human can be without being classified as superhuman.

Peak Human Agility: Natasha’s natural agility is heightened to the peak of human capability. She is as agile as a human being can be without being classified as superhuman.

Peak Human Reflexes: Her reaction time is similarly enhanced and functions with the peak of human efficiency and capability.

Peak Human Durability: Natasha’s bodily tissues have been augmented to the pinnacle of human development. Though she can be injured in the typical ways other humans can be, she is as physically tough as a human being can be without being classified as superhuman.

Peak Human Senses: Her five senses are enhanced and function at peak of human perfection.

Peak Human Immune System: While she is susceptible to disease like all other ordinary humans, her ability to resist and recover from them is heightened to the peak of human capability.

Extended Longevity: The serum variant has also extended her lifespan by dramatically slowing her natural aging process. Although she is almost 70 years old, she has the youthful appearance and vitality of a woman in the physical prime of her life.

Master Martial Artist: Natasha is an expert in the field of martial arts. She is proficient in karate, judo, aikido, savate, boxing, and multiple styles of kung fu.

Expert Acrobat: She is an Olympic class athlete, gymnast, acrobat and aerialist capable of many difficult feats.

Multilingual: She is fluent in Russian, English, French, German, Chinese, and various other languages.

Expert Tactician: She is a very effective strategist, tactician, and field commander. She has lead the Avengers and even SHIELD on one occasion.

Talented Hacker: Natasha can hack into most computer systems without tripping any firewalls or security.

Master Seductress: She is an expert in the field of seduction. Natasha has been infamously known to bend many different men to her will and sometimes even get them to do her bidding for her. Hawkeye and Iron Man are two examples and living proof of this. She sometimes continues deceiving certain men through means of acting if she still has a further use for them.

Expert Spy: Natasha is a dangerous secret agent trained in espionage, stealth, disguise, infiltration, and demolitions. Her talents and years of experience have enabled her to reach a high ranking as an agent of SHIELD.

Though the serum has kept her in her physical prime, it’s effects on her body have made pregnancy impossible without taking immuno-suppressants.

Natasha has taken a different version of the Super-Soldier Serum. This gave her physical abilities much like Captain America, though not as great as his. She possesses peak-level physiology, making her as strong, agile, fast, and durable as a female human can possibly be without being classified as superhuman. This also extends to her senses and immune system, which are similarly heightened to peak human level. From a young age, Natasha was trained to become a martial artist, sharpshooter, and acrobat, and has become a master of all of these skills. She has since become one of the top espionage operatives in the world. Natasha has also proven herself to be one of the best information gatherers in the Marvel Universe. She is fluent in many different languages and is an expert computer programmer and hacker. She is an accomplished battle strategist and field commander, and has been the leader of the Avengers and even SHIELD on one occasion. In the 2004 Black Widow mini-series, Natasha’s background was retconned. She was subjected to bio-technological and psycho-technological enhancement. This answers the question as to why Natasha is still so youthful despite being born prior to World War II.

Equipment
Costume Specifications: Synthetic stretch fabric which has been augmented to be highly resistant to damage even small arms fire and high temperatures. Microscopic suction cups on her costume allow her to scale walls and cling to ceilings, just as her namesake. She carries state-of-the-art versions of gear used by top modern spies, including stunners, tear-gas, a cable and a transmitter. Natasha can quickly travel across rooftops and from building to building with a grappling hook and a retractable line called the Widow’s Line. She also carries various types of weapons, ranging from melee to long distance.

Special Weaponry: Various automatic weapons and firearms, combat knives and explosives as needed. Her primary weapon is the ‘Widow’s Bite,’ which is delivered via her wrist cartridges. They emit a potent electrical blast with a maximum power of around 30,000 volts.

Not much is known about Black Widow’s history prior to World War II other than she was born as Natalia “Natasha” Alianovna Romanova in Stalingrad, Russia to unknown parents. Nazi’s set fire to the building that Natasha and her parents were living in and her mother threw Natasha out of the window into the arms of a Russian soldier named Ivan Petrovitch, who was serving in the army at the time. Ivan took care of Natasha while she was growing up and later became her chauffeur. After a youth spent traveling through war-torn Europe with Ivan and his company of troops, Natasha was recruited by the Red Room. Her masters there arranged a marriage with the hero pilot Alexei Shostakov, and soon with the help of Red Room brainwashing, Natasha became convinced she was an ordinary Russian housewife. When Alexei was (seemingly) killed, Natasha found she had a deep-rooted desire to serve her country, and demanded the government let her serve in his place. She became the KGB’s top agent.